Thus I Swallowed Down (Hinabgeschluckt)

The combined visual effect of the two images of Front and Back Cover, Dec. 6, 1992, New York Times Magazine creates a heightened sense of reality through proximity, association, and memory. 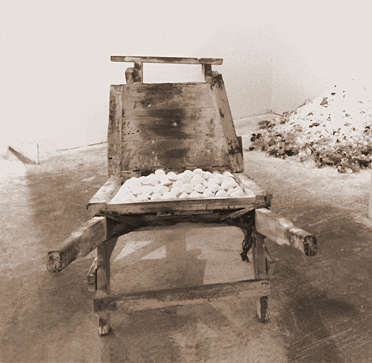 The wheelbarrow was reconstructed and loaded with a cargo of chalk.    More photos...

The antithetical covers of the Sunday New York Times Magazine, were not accidentally conjoined. They were created by a designer as a single board or digital file, and printed to spread across a single piece of paper. The front cover purports to bring us startling news and images of the dire consequences of the prolonged drought in Somalia: a malnourished, tense and suffering child faces the parched earth, his back protected from an unrelenting sun. The ominous wheelbarrow can be seen either as devoid of produce from the fields or goods that might relieve the child's suffering, suggesting that there is no hope, or it could be interpreted as transport that will take the child to his grave. The horror conveyed by the photograph is heightened by the appearance of individuals in the background who appear to be going on their way, oblivious to the child's urgent needs. The back cover, a perfume ad for Bloomingdale’s, cruelly flips the message of a child’s suffering with the alluring promise of living well and enjoying a paradise on earth. A robust, healthy man is relaxed and idle because he is nurtured rather than harmed by the elements, his face to the sun, his back immersed in the deep pleasure of shallow waters that promise to be cool (not cold) and sweet smelling. How many of the over 1.5 million Sunday Magazines ended up casually mislaid with their two covers spread out to reveal the embedded relationship of capitalist journalism to the human condition?

The installation prolongs association of the two diametrically opposed 'realities' represented in the front and back covers by replicating two of the physical objects in the photographs and commenting on the opposite forces which unite them: wet/dry, supine/prone, pleasure/pain, domestic/foreign, etc. Our tasks were not unlike those of the graphic artist who orginally prepared these photographs side by side for the printer. The installation shows media is no longer the message but the frame, the filter, the screen, the peephole, the window, the lens by which we interpret the world.