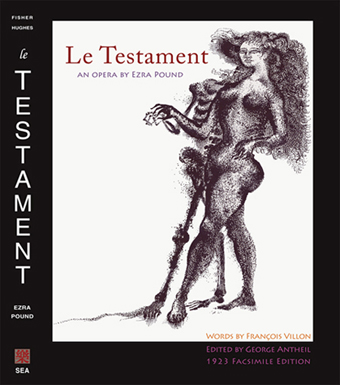 The one-act opera in two scenes dramatizes the hour in which French poet François Villon (b.1431) pens his most famous poem, Le Testament. Duration: c. 50 minutes.

Scene One: a square fronted by a brothel, a bar and a church in Villon’s Paris, circa 1462. Condemned to death and with a warrant out for his arrest, Villon sits before the tavern writing his “last will and irrevocable testament.” Too poor to have material goods, he wills his poetry and his wit to friends and enemies alike. Three arias on the pervasiveness of death, and two arias of regret for lost youth and for lost beauty set the mood: time is the evil. This is confirmed with the boisterous arrival of the old whore Heaulmière who sings of lost charms and old beaux. A procession of colorful characters from Villon’s Paris follows: a gallant en route to the brothel sings of love; Villon’s mother sings for the salvation of all; Bozo the drunken brothel keeper sings of his sordid life; the spent gallant stumbles from the brothel to renounce love. The scene climaxes with a group drinking song in praise of Noah and the vine, the arrival of the police and the arrest of Villon.

Scene Two: The opera concludes with an eerie and preternatural scene evocative of the Noh drama: six corpses strung from the gibbet sing for the salvation of their souls (Frères humains).

Part I. Facsimile pages of the holograph score with music in the hand of Pound’s music editor George Antheil, lyrics in the hand of Ezra Pound, and performance notes in the hands of A. E. Harding of the B.B.C. and Ezra Pound, the latter being revisions for the 1931 BBC broadcast as an experimental features program. Music pages are beautifully photographed in 110 color plates and displayed against a glossy black background, with bar numbers added to the score. A complete libretto and a synopsis follow. 125 pages.

Part II. An overview of Pound’s music by Stephen J. Adams of University of Western Ontario; Essays on the relationship of music to Pound’s poetry by Robert Hughes and Margaret Fisher. 85 pages.

Cover art features the designs by Ariel for the 1971 San Francisco Opera production.

Ships with audio CD in a tamper-proof sleeve in the inside back cover. 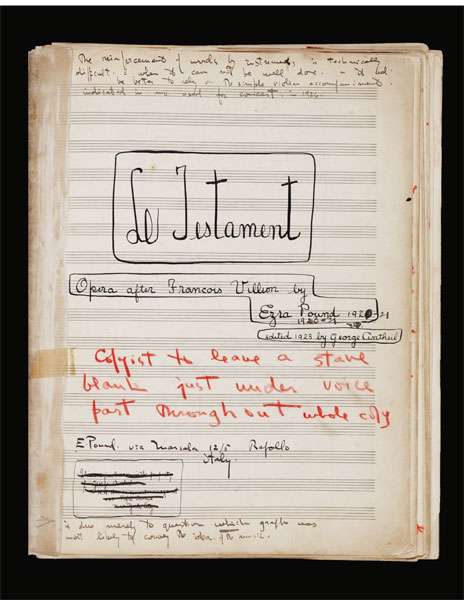 Audio Excerpts from the CD

From the audio CD

For the publication of Pound’s complete oeuvre of music, Robert Hughes and Margaret Fisher received a Lifetime Achievement Award from the Ezra Pound Society (2014).

Robert Hughes, composer, conductor, and bassoonist, met Pound in Washington, D.C. Their brief discussion about music led Hughes to mount Pound’s first opera Le Testament with the San Francisco Opera in 1971. He assembled Pound’s complete second opera Cavalcanti from manuscripts that had become separated over time and premiered that work in San Francisco with the Arch Ensemble for Experimental Music. He has also published performance editions of Pound’s complete works for violin. Hughes is conductor and artistic director of two audio CD’s of Pound's music.

Margaret Fisher, Ph.D., is an independent scholar and performance/media artist. She is the author of Ezra Pound’s Radio Operas: The BBC Experiments (The MIT Press) and The Recovery of Ezra Pound’s 3rd Opera, Collis O Heliconii (Second Evening Art).